The ‘Great Retirement’ – Trouble ahead?

The Great Retirement may have become one of the unforeseen consequences of the Covid pandemic. Governments have been trying to nudge people into working longer by abolishing compulsory retirement, raising pension ages and encouraging employers to recruit workers in their 60s. By and large it has been working. The average age at which people leave the labour market has been rising in most OECD countries since 2000.

But Covid seems to have thrown this trend into reverse. Recent data from the UK’s Department for Work and Pensions shows that the average age of retirement and the employment rate of older workers has been falling since the pandemic. The UK now has 1 million fewer workers than it did in 2019. One quarter of that fall is accounted for by 50-64 year olds becoming economically inactive. Similar patterns have been reported in the US and Australia. This will not be welcome news for governments or for employers.

The 2020s is the decade during which the challenge of an ageing population shifts from being tomorrow’s problem to today’s. In many countries, falling birth rates and rising longevity have raised the average age of populations. As a result, there is an increase in what economists call the dependency ratio – indicating the proportion dependent on the working age population. Most advanced economies and many emerging ones will see their dependency ratio increase over the next decade. 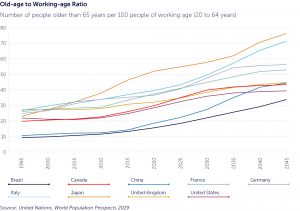 Perhaps, there couldn’t be a worse time for the over-50s to start leaving the workforce in droves. It would further shrink an already shrinking workforce, add to governments’ fiscal challenges and would be storing up trouble later in life for people who have retired early without properly assessing their longevity or the state of their long-term finances.

So far, few employers appear to have paid much attention to this problem, but skills shortages and a tighter labour market are likely to mean that employment policies to address the needs of older workers will assume a new importance. Mercer’s Global Talent Trends study in 2020 showed that 97% of C-suite are concerned about high performers in their organisations taking early retirement but only 33% of employers have an active programme in place to manage retirement. Demographic projections suggest that the recent skills shortages may become a recurring feature of the 2020s economy. It will be in the interest of many companies to encourage older workers to stay in employment. Flexible working policies, targeted development plans, recognition of healthcare needs, and support with financial education and planning are among the many measures that some employers have introduced to support older workers. Given the increased scrutiny companies are facing to demonstrate the strength of their ESG position, how a company supports its employees in later life may become a source of strategic competitive advantage for those companies that do, and a reputational risk for those that don’t.

PARC are a specialised Performance and Reward membership organisation, and sister business to SD. To discuss PARC membership please get in touch.

To examine these issues in greater detail, PARC published a discussion paper on Retirement Strategy, which outlined the critical issues to be addressed, and highlighted some of the emerging best practice. The paper was also the focus for discussion at a PARC member meeting, at which experienced practitioners and experts in the field of retirement and reward gave their insights. The Post Meeting Notes summarise the discussion and outputs of this meeting.

You can find out more about which cookies we are using or switch them off in settings.

This website uses cookies so that we can provide you with the best user experience possible. Cookie information is stored in your browser and performs functions such as recognising you when you return to our website and helping our team to understand which sections of the website you find most interesting and useful.

These cookies are strictly necessary to provide you with services available through our website and to use some of its features. These must be enabled at all times, so that we can save your preferences.

This website uses Google Analytics to collect anonymous information such as the number of visitors to the site, and the most popular pages.

Please enable Essential Cookies first so that we can save your preferences!